Nitrogen Production – Engineered to Save 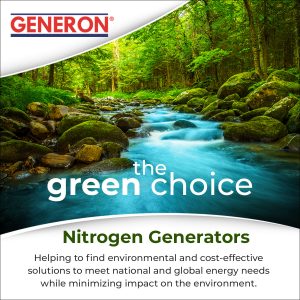 Generon is a world leader in the engineering and construction of Gas Separation technology required for the generation of Nitrogen. Oxygen and other gases for thousands of applications.  With 40 plus years of experience, in nearly every market place, Generon is ever seeking improvements and effectiveness to the technologies we engineer and commission.  Generon is again amongst the leader’s offering technology designed to save cost and environment impact with our patented technologies.

As the world searches for ways to reduce the negative impact of our society on the environment, it is unlikely that one solution solves the problem. It will be the collective efforts of thousands of actions across all industries to make a meaningful drop in our environmental footprint.

Most people do not realize that the current major source of industrial Nitrogen is from the large industrial gas companies. They have made their business model around building very large industrial air separation plants (1,000 – 50,000HP). These plants primarily produce Nitrogen and Oxygen by liquefying air and separating the different components by cryogenic distillation.

The original model for these plants was to build a plant next to a large industrial user such as a steel mill or chemical complex. In these scenarios, the gases produced in the air separation plant, Nitrogen or Oxygen, was piped directly to the industrial facility as a gas.

This business model is very financially efficient for large industrial gas consumers (steel mills, chemical complexes) where the desired gas can be supplied directly to the user by means of a gas pipeline.  However, there are hundreds of thousands of applications, where this model does not make energy/ environmental sense and in many cases economic sense. This is because the volumes required or distances from the Air Separation Plant do not justify a pipeline delivery of the nitrogen gas.

Take, for example, an application where a manufacturing company needs Nitrogen to run its laser cutting operation. Nitrogen from a large industrial gas plant must take the nitrogen gas produced in the distillation column and cool it to -320F to turn it into a liquid, store the liquid Nitrogen in a large cryogenic storage tank, and then fill a large transport truck to bring it to the customer site. At the customer site, the Liquified Nitrogen is then placed in a cryogenic storage tank. Finally, when the customer needs the gas nitrogen, it is passed through a vaporizer that causes the liquid to turn back into a gas.

The energy used to liquefy the nitrogen, transport the nitrogen to a customer site, along with the associated losses is extremely large and results in large amounts of CO2 being omitted into the atmosphere. For 60-70% of all applications, these steps are not needed and the amount of CO2 being omitted can be greatly reduced because the cryogenic (cold) properties of liquid nitrogen are not required.

Generon has for the last 40 years been a leader in the manufacture of equipment that can efficiently separate nitrogen, from air utilizing both hollow fibers (Membranes) or carbon molecular sieves (PSA) technologies.  These technologies can produce Nitrogen gas efficiently from 95% – 99.995% purities, which covers the vast majority of all applications. The following summarizes the amount of energy that can be saved and subsequently CO2 emissions avoided for various purities of Nitrogen Gas.

If we assume that 60% of liquid nitrogen applications can be converted to Generon’s Membrane or PSA technologies at a purity of 99.5% (very conservative estimate) 3,660,000 tons of CO2 would no longer be emitted into the atmosphere.

This would be equivalent to the emissions of 732,000 cars. To put this in perspective, in 2020, 295,000 electric cars were sold. Electric cars currently do not eliminate all carbon emissions, only relocate it to a remote power plant. In the future, as more renewable energy capacity comes online this situation will change.

Utilizing the Generon technologies will not alone solve global warming issues, but it is one technology that currently exists that is a step in the right direction.

Another potential area that has resulted in a great waste of energy has been the over specification of the required purity for the applications: The large industrial gas companies use large complex distillation columns to separate the air into Nitrogen, Oxygen, and to some extent Argon. A byproduct of this process is that the Nitrogen Gas produced is at a very high purity of 99.995 +%. The large industrial gas companies for many years have convinced the users that this level of purity is required for their processes. The energy penalty for over specifying the purity required can be quite substantial. (see above table)

A number of technologies exist today that can significantly reduce the energy consumption and subsequent Carbon Footprint of current industrial gas companies’ business models. Technologies have been slowly gaining acceptance across many manufacturing applications to produce the Nitrogen (or Oxygen) gas required on the customer site. These technologies produce the desired gas at the required purity and pressure on demand. This avoids the wasteful practice of liquifying the nitrogen gas for the convivence of transport and storage.

Two primary technologies are available to produce both Nitrogen and Oxygen on the customer site at whatever purity is required.

PSA is a technology used to separate some gas species from a mixture of gases under pressure according to the species’ molecular characteristics and affinity for an adsorbent material. It operates at near-ambient temperatures and differs significantly from cryogenic distillation techniques for gas separation. Specific adsorptive materials (e.g., carbon molecular sieves for nitrogen) are used as a trap, preferentially adsorbing the target gas species at high pressure. The process then swings to low pressure to desorb the adsorbed material.

This process efficiently produces nitrogen gas from compressed air up to 99.995% purities.

The membrane separation of gases is simple in concept. At the heart of the technology are polymeric membrane materials that allow for the rapid passage of one gas while minimizing the passage of another when applying a pressure gradient across the membrane.

The GENERON® Membrane modules contain over one million hollow fibers that selectively remove oxygen and water vapor from compressed air. Compressed air enters one end of the hollow fiber and enriched nitrogen product flows continuously from the other end. Oxygen permeates the side of the fiber along with water vapor. The fibers are contained in side of a device which facilitates the collection of both the Nitrogen and Oxygen. The Nitrogen and Oxygen produced can be either stored or used directly in the application. This Membrane technology can produce Nitrogen purity up to 99.99%.

These technologies, if widely applied, would have a significant impact in reducing unnecessary CO2 releases into the atmosphere due to wasted energy from unnecessarily liquifying the product gas. Additionally, optimizing the required purity for the application would have significant additional benefits.

Generon has been developing these technologies for over forty years. Generon has over 100+patents in this area. Generon is committed to the continuing development of its Nitrogen and Oxygen technologies.

For further information regarding all of our products and services related to environmental solutions such as Self-Owned Nitrogen Production, please contact our sales and engineering team via our online form, or at or +1.713.937.5211.