How to Separate Nitrogen from Air – Nitrogen Extraction from Air

The widespread use of nitrogen in industrial processes makes it vital for operators to understand and employ the most efficient nitrogen generation techniques. While nitrogen occurs freely in nature, it is not readily available in its most useful form. Nitrogen is typically mixed with other component gases of air that may have an undesirable effect on industrial manufacturing processes.

Manufacturers have learned how to separate nitrogen and oxygen from atmospheric air to take advantage of nitrogen gas benefits. As a key player in the membrane and adsorption technological space, GENERON provides top quality nitrogen extraction solutions guaranteed to generate high purity nitrogen gas that meets all industrial requirements.

Why Pursue Nitrogen Production from Air?

Nitrogen in its diatomic form is abundant in nature as a major component of air. Nitrogen constitutes approximately 78% (by volume) of air. This makes it a free, readily available source for nitrogen – eliminating the need for complex chemical synthesis.

How is nitrogen separated for industrial use? Extracting nitrogen from air is possible by forcing ambient air through several types of generation processes.

How to Separate Nitrogen from Air

There are three standard methods used to extract nitrogen from air listed below:

All three techniques can be used to produce high purity nitrogen for industrial use.

This specialized fractional distillation technique produces high-purity nitrogen. However, this is one of the more complicated examples of how to extract nitrogen from air.

The process involves pulling ambient air into the distillation setup using a compression device. The compressed air is then cooled to about 10°C before being passed through a series of filters to eliminate moisture, oil, water vapor, and other contaminants.

Once the air has been cleaned, it is channeled through a heat exchanger to an expansion engine. The rapid expansion of the compressed gas within the engine will cause its temperature to fall below its condensation point (approximately -195.8°C within 1 atmosphere of pressure) and liquefy. Once liquefaction is achieved, a high purity fraction of nitrogen is distilled out of the air and channeled to storage units.

These techniques typically involve one of two processes:

These processes depend on the differential speed of travel and adsorption by membranes and molecular sieves to generate nitrogen. 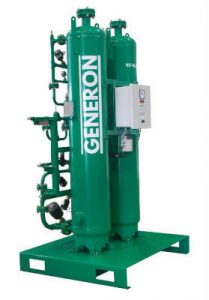 Extracting nitrogen from air using pressure swing adsorption technology is based on the preferential adsorption and desorption of oxygen and other gaseous contaminants by a molecular carbon sieve housed within two adsorptive-desorptive towers.

The procedure involves two stages which are coordinated simultaneously.

Adsorption removes oxygen, vapor, and other impurities from a stream of pressurized air allowing nitrogen to flow through to a collecting/ storage unit. This process will continue until the molecular sieve within the adsorptive tower is completely saturated.

Desorption is a reversal of the adsorptive process that released trapped oxygen from the sieve material within a desorption tower. This process will regenerate the molecular sieve in readiness for a new cycle of adsorption.

For a quote on a GENERON® PSA Nitrogen Generation System, please contact us today! 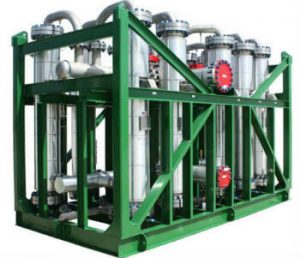 The process involves pulling atmospheric air into the generator, compressing it, and passing it through a series of filters before gas separation. Once compressed, the air is channeled through a high-efficiency filter to remove water vapor and other particulate impurities.

The cleaner dried air is then exposed to an activated carbon scrubber that removes any remaining particulate or gaseous contaminants. After exposure to the membranes, a nitrogen-rich gas stream can be collected for industrial uses.

Contact the membrane nitrogen generator manufacturers today at GENERON for a quote!

Benefits of Generating Nitrogen from Air

GENERON® Nitrogen Generators Are the Solution You’ve Been Looking For

Over the last four decades, GENERON has remained committed to providing its customers with the most efficient nitrogen generation solutions. Our services are targeted at achieving maximal industrial productivity while remaining cost-effective.

Our nitrogen generators incorporate the latest in membrane and adsorption technology which makes them uniquely suited to a broad range of industrial applications.

Contact us today for a quote or for more information about the nitrogen generation services we offer.