How Does an Oxygen Generator Work for Industrial Use?

In modern industrial manufacturing, there is a widespread demand for high purity oxygen across different applications. Sourcing the required quantities of oxygen gas can be made cost-effective with access to a dedicated oxygen generator.

This article describes how an industrial oxygen generator works and outlines the most common applications for the generated gas.

What Is an Oxygen Generator?

An oxygen generator is a device that separates oxygen from compressed air using special selective adsorptive technology called pressure swing adsorption (PSA). The compressed air used in the oxygen generation process has a similar composition to ambient environmental air with 21% oxygen and 78% nitrogen. The oxygen contained in the compressed air is allowed to flow through a zeolite molecular sieve which retains nitrogen resulting in high purity oxygen at gas production outlets. 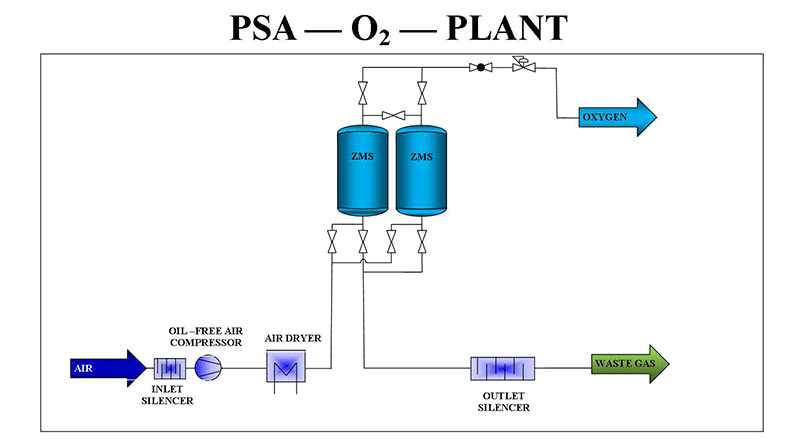 The pressure swing adsorption process for a PSA oxygen generator is essentially the same as that of a nitrogen generator with one major distinction. The adsorptive material inside its molecular sieve is made of zeolite rather than carbon found in a nitrogen PSA device.

During a routine operation, compressed air channeled through the oxygen generator will be separated into its component gases. The zeolite molecular sieve will selectively adsorb nitrogen that meets it while allowing high purity oxygen gas to flow onwards to a product gas outlet.

A unique feature of zeolite that makes it ideal for an oxygen generator is its ability to released retained nitrogen gas once the pressure within the generator is eased. This makes it quite easy to regenerate the medium for a further cycle of oxygen generation.

In addition to our PSA variant, GENERON also manufactures a VPSA oxygen generator that supplies the zeolite vessels using a low-pressure blower and regenerates them with a vacuum.

The typical components of an oxygen making machine are outlined below:

Although the first three components mentioned are technically part of the oxygen generator itself, they are crucial to its function providing clean, dry compressed air to the PSA unit for separation and oxygen concentration.

Oxygen generators are currently in use in a broad range of commercial and industrial manufacturing applications. These devices play a crucial role in providing useful quantities of oxygen gas required to drive various processes.

How Does an Oxygen Generator Work?

An oxygen generator using PSA technology utilizes the ability of adsorbent zeolite material to separate a stream of compressed air into its component gases. The pressure swing adsorption process to produce high purity oxygen is a two-stage cycle that involves simultaneous adsorption and desorption activities in two generation towers.

The adsorption stage of oxygen generation uses an adsorptive tower packed with molecular zeolite pellets that selectively retains nitrogen while allowing oxygen to pass into a collecting tank as product gas under pressure.

This process of selective adsorption will continue until the adsorptive tower reaches its maximum saturation point at which the zeolite sieve can no longer absorb more nitrogen gas.

This second step in the PSA oxygen generation process is essentially a reversal of the adsorption process. Once the saturation point for a tower in the adsorptive phase is reached, its function is altered. Regeneration of the zeolite material is by rapidly depressurizing the cylinder to release absorbed nitrogen gas into the atmosphere.

The entire PSA process is automated with a central regulatory unit detecting oxygen and nitrogen gas saturation levels in both the adsorption and desorption towers. The phase switch is done by opening or closing the appropriate process valves and raising or reducing the pressure within the zeolite packed cylinders.

At GENERON, our goal is to help you achieve maximal industrial productivity while remaining cost-effective. Among our products and services are state-of-the-art oxygen generators suited to a diverse range of commercial and industrial uses.